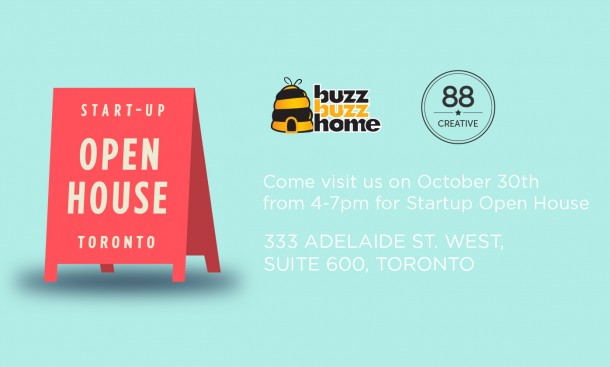 So as it turns out, both us and our office mates at BuzzBuzzHome happen to be startups. Which is perfect because we just signed up to host an open house as part of Startup Open House Toronto 2014.

Home sweet home. Don’t knock over the giant Jenga or the downstairs people will get all angry and it’ll be awkward. Trust us.

What is Start Up Open House Toronto? Well for starters, it’s a really long name that’s a pain to type out but beyond that, it’s a chance to get an inside look at the industry and how startups work.

That’s why on Oct 30th from 4-7pm we’re opening our doors to the general riff raff – um, we mean public – to get an inside peek at how we do things.

Everyone was paid a garbage bag full of popcorn each to pose in this picture. Talk about a work perk!

Anyway, feel free to stop by and say hello to any and all of us, as we’ll be here from 4-7. Except Claire, her home planet needs her that night.