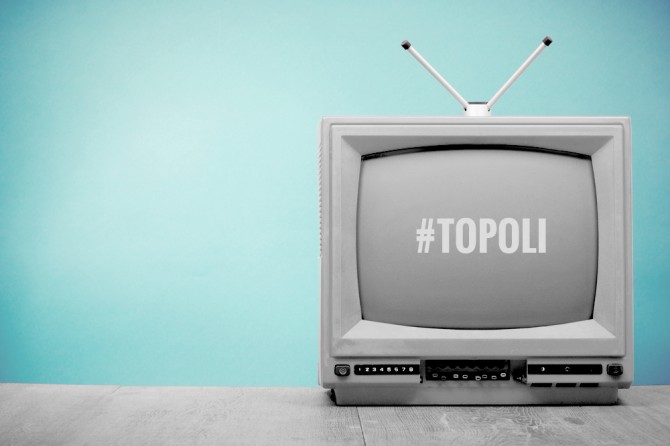 Confession: Twitter is my #1 news source. It’s instant and gives me just enough information so I know which issues are in the news, but I skip out on all of those boring details and facts (bleh!). And I might even get a clever quip from someone I follow about those newsworthy topics, unlike anything on CNN which just gets me all depressed then shows me commercials that try to sell me prescription pills to cure my depression just to get me depressed all over again. (Who buys those drugs anyways? You know the ones that have one minute and 28 seconds of disclaimers in their one minute, thirty second commercials?)

I digress. Back to Twitter. I’ve often fallen deep into hashtag rabbit holes just to find out what people are saying about the news rather than finding out what the news actually is. Can you guess my guilty hashtag pleasure these days? If you guessed #TOpoli, you guessed right. Before you go and call me a #polinerd give me a chance to explain. #TOpoli has become my greatest source of entertainment. The Toronto political landscape has become a circus since the Ford freak show came to town, and quite frankly our city’s Twitter community is pretty damn funny, in both the ‘I’m laughing with you’ way and the ‘I’m laughing at you’ way.

Is anyone surprised that john Tory’s entire platform is asking (very forcefully, mind) mom and dad for money? #mayorverucasalt #topoli

Nice to hear crowd answer “not you!” to #DougFord usual “who do you trust to protect your dollars” garbage. #TOpoli pic.twitter.com/BC09t8Au0H

Toronto has forever been dying to make news in this world. We showed pride when the world was scared to interact with us during SARS and even turned it into a music festival affectionately named SARSfest. The City of Toronto mentions Drake in 99% of all press releases and even though the CN Tower is no longer the tallest free-standing structure on earth, we still tell people it is. But ever since Rob Ford came along, the Twitterverse can’t get enough of us and the #TOpoli hashtag has been used over 14,000 times in over 20 countries (that fact is actually true). Watching people talk about my problems has never been so entertaining, but is all of this chatter helpful?

I sometimes wonder if the Rob Ford scandal would have gotten the attention it did without social media. Twitter has given a voice to people with all kinds of different opinions, and provides a platform for all the shouting to take place. For many people, this would seem like the perfect democratic vehicle, but it also gives stories that wouldn’t normally be reported a set of legs. Reporters are constantly looking to fill the #TOpoli feeds for the hungry, ravaging wolf pack (not excluding myself in this characterization), and that means getting a play-by-play of Rob Ford walking into Queen’s Park is actually a story. He’s the mayor for god’s sake – it’s not a story that I come into work every day, is it?

We’ve recently come up with a new inside joke at 88 Creative (ya, we’re close). We’re constantly sharing news with each other across our shared desk and if one of us has already heard the news shared, that person will yell “that is SO 12 minutes ago.” Is being so 12 minutes ago the problem with Toronto politics? The need to be current and get eyeballs means that news outlets are making news out of everything, and Twitter has allowed us to grab on to every hanging morsel and spread it like wildfire. I’m just not sure if this is a good thing or a bad thing for Toronto politics.