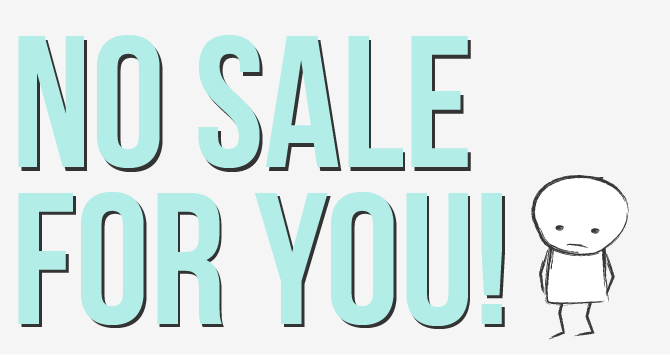 We live in an age where any schlub with a Twitter account can start a “social apocalypse” for brands.

Despite knowing better, I am one of those schlubs.

It started innocently enough: someone in our shared office sent through a link for a computer at almost 80% off. It seemed too good to be true but the marketing materials and the math added up so it had to be legit, right? Within the hour, our office had purchased a total of 28 computers.

Then came the questions about the legitimacy of the deal, and if this ridiculous deal actually did turn out to be too good to be true, how likely was it that Lenovo would honour the pricing? There were rumors and rumblings of “friends of friends” and “according to the internet” (which, I should say, is a source to be trusted 100% of the time) that Lenovo was aware of the error and we weren’t getting our awesome (read: cheap) computers, but we wanted to wait for the official word from Lenovo. To add to the confusion, everyone who purchased the computer received a cryptic email sent immediately after the order confirmation that essentially wipes Lenovo’s hands clean of any legal ramifications should they cancel your order.

All that email did was anger up the social community (myself included) and it started a barrage of tweets and Facebook posts to Lenovo’s global Twitter account, as well as several major media outlets. There was no indication on Lenovo’s accounts that they were aware of the price discrepancy or any promise to fix their mistake. They just kept on with their normal, everyday content.

If you smell fire, do you just turn around and stick your fingers in your ear and hope it puts itself out? That’s exactly what Lenovo did. They ignored the (social) fire until they had to respond. We even saw the #lenovosucks hashtag trending in Canada, and it’s still being used as I write this. They ultimately did address the pricing error, emailing everyone who purchased to let them know the sale price wouldn’t be honoured, which only led to more negativity (especially because the incorrect price was still listed on the website even hours after they sent that email).

Sure, selling thousands of computers at or slightly below cost would have been a (minor) blow to their bottom line, any good business mind can recognize that. What’s more troubling is the amount of irreparable damage to their brand this “social apocalypse” (their words, not mine) has caused by leading the customer along and then ultimately cancelling the sale. In a market where consumer research is fundamental to the sales funnel, Lenovo has essentially tarnished their brand in Canada by choosing to remain silent and deflect the blame to the sales and web team. Where do you think people look first for computer recommendations (hint: it’s not your website).

Here’s how they could have avoided a full-fledged social media crisis – or at least dealt with disgruntled customers in a more effective way:

1. Monitor: It isn’t hard to set up alerts and follow keywords on social media. If you’re not doing this for your own brands, I strongly recommend you go back and rethink your social media strategy and its place in your marketing mix. Keeping on top of keywords allows you to recognize the issue before it turns into a big deal and hopefully will allow you to get your message out ahead of the firestorm.

2. Fess up: Acknowledge the situation and get in touch with as many people as possible as fast as possible to report that the situation is being handled. Nothing infuriates people more than straight up ignorance. To their credit, the Lenovo Canada account has been re-activated and the team is replying people now. In spite of this, it’s been clear to see that a quick response would have been key. Instead, Lenovo is stuck with a day’s worth of hearsay and rumor that’s been blasted on social media.

3. Communicate (broadly): Part of the reason that this firestorm was kicked up was because Lenovo started replying to individual tweets instead of putting out a concise PR message. Social Media 101: individual responses are seen only by people who follow both parties in the conversation. Replying to each tweet individually is just spinning your tires without getting anywhere.

At this point, it seems like Lenovo thinks it can get through this social media disaster if it just buries its metaphorical head in the sand and lets the issue run out of steam, but I know one thing for certain: a good percentage of people who bought the laptop (and who were subsequently sent a “whoops, sorry” email) will never buy a Lenovo product again. Considering many of these almost-customers play and very often work online, that’s a lot of computers not purchased due to shoddy customer service and shady “pricing errors.”

Lose $800 off of a laptop one time, or lose a lifetime of brand loyalty. That’s some opportunity cost.