A Year of Real-Time Marketing: Can We All Stop Now? 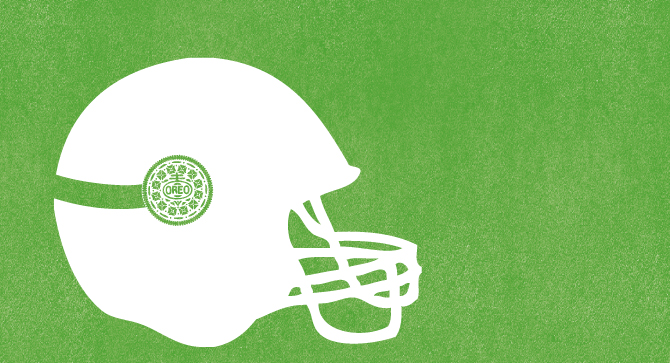 Unless you live under a rock (or have been floating on the Pacific for the past 13 months ), you know that last night was the Super Bowl. But it was also the one-year anniversary of something extremely important – and no, we don’t mean Beyonce’s fierce halftime performance. What I’m really talking about is the now-(in)famous Oreo “Dunk in the Dark” photo . 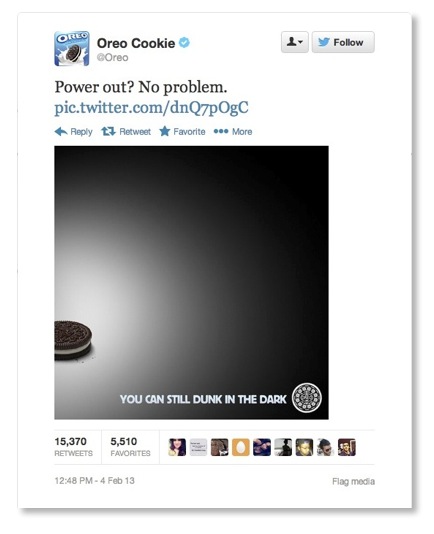 So why is it an anniversary worth celebrating? Well it ushered in a new era of “real-time marketing” for agencies, brands, and marketers everywhere. It sure wasn’t the first time a brand had reacted to an event as it was happening, but it was the sheer reach (15,000 retweets and counting) and press coverage that made it the Twitter update heard ’round the world.

As I settled in to watch the Super Bowl last night (read: watched other shows while I waited for the half-time show), I wondered how many brands (including Oreo) would be waiting by their keyboards, ready to throw out witty real-time commentary with enthusiasm. How many agencies were gathered at the office, Photoshop and Hootsuite at the ready. And I thought, as I often have over the past year, STOP THE MADNESS.

The reason Oreo’s Tweet was so impactful is that it was unique. Sure, every brand puts out Super Bowl promotions, sales, commercials, and content. But Oreo capitalized on something that had nothing to do with their brand and found a way to make it relevant. And they were the only brand to get something on-brand out that quickly, which surprised people since usually a large brand like that would take at least a day to get a piece of creative through approval levels & legal.

Since that Tweet, or as I call it “the Oreo awakening,” pretty much any brand with a social media manager has added real-time marketing to their list of daily to-dos. We’ve seen Denny’s try to get the cast of Girls to eat Moons Over My Hammy; DiGiornio pizza wax lyrical about NBC’s The Sound of Music; and laundry detergent Gain try on Pharrell’s Smokey the Bear Grammy’s hat for size.

In fact my favourite activity now is looking on Adweek, Digiday, and Marketing magazine the day after a big event to read the round-ups of brand fails from the night before. It’s almost as entertaining as watching brands try to celebrate holidays like Martin Luther King Jr. day (just don’t. Please stop).

Oreo’s Tweet and the subsequent explosion of real-time social media marketing reminds me of when social media was just being adopted by brands in 2009. When I ran marketing for a startup we were featured in Forbes in 2009 solely because we had a Twitter account and used it as one of our main marketing channels. Fast forward five years and the only way you’d get into Forbes for having Twitter is if Anonymous hacks your account.

It’s the same with real-time marketing now: with every brand manager and agency strategist coming up with their best one-liners, there’s nothing unique about it. I’m not saying there aren’t some funny real-time quips (thank you Arby’s ), I’m just saying that you’re no longer the only Oreo in the room.

It was no surprise to wake up this morning to a list of real-time marketing brand fails from the Super Bowl (Digiday had a liveblog devoted solely to tracking brands’ real-time social media updates), including JC Penney Tweeting with mittens on (cute idea, terrible execution). Perhaps the biggest win was Oreo , who decided not to try any real-time updates this year, instead just Tweeting that they were “going dark” during the broadcast.

The biggest lesson here? It’s better to be ahead of the curve than desperately trying to catch up, so think about how you can be innovative rather than just emulating what other brands are doing. And please, think twice the next time you’re Tweeting for a client or your brand during a major event – I don’t want to see any real-time #fails the morning after the Oscars.